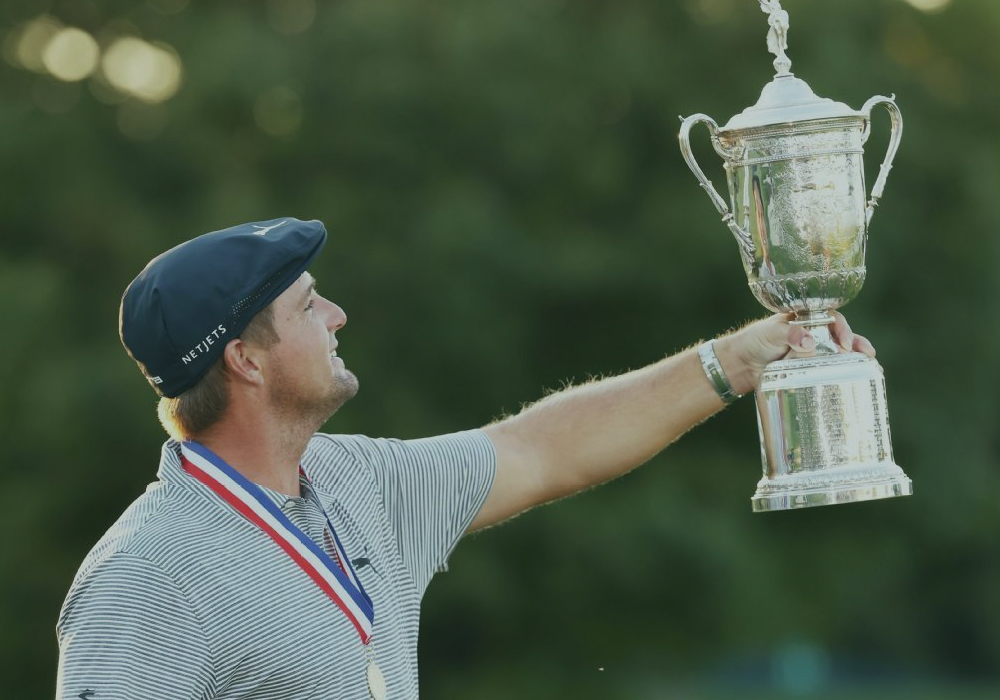 Strolling amongst the crowds at the 2021 Open Championship, it was common to hear excitable spectators say to each other…

“Let’s make sure we see Bryson mash/bomb/pummel/smoke a drive before we leave!”

Because since Bryson ‘bulked up’ back in 2020 during the pandemic, interest in how to hit the ball as far as possible has boomed (sorry).

Never mind the strategic masterclass on display at Royal St George’s from the likes of Morikawa and Oosthuizen. There’s just something about hitting bombs that resonates deep within us golfers, that hits some kind of tuning fork within our golfing soul...

The golf PR machine knows this and play on it. From getting new players excited to try golf for the first time, to enticing Joe Hacker to keep buying a new driver every year, a significant majority of what we see focuses on distance.

Back to Bryson. What is far less commonly talked about, but arguably more relevant to his success in the last 3-4 years, is the mental training he’s been doing.

Dig a little deeper and you’ll discover that it has been reported on, it just hasn’t stuck in the same way as his pursuit of speed has. Which is interesting, because what he’s doing is, well, just as out there and arguably, more effective.

But it doesn’t appeal to the media or to other golfers in the same way. Why? Because you can see distance gains. But you can’t see mental improvement gains.

How do we quantify it other than saying there’s a correlation between this mental training and the tournaments he’s won in recent years – the US Open, the four wins in 2018, and the three wins since he bulked up?

Well we can start to only if we examine the method he’s using to train his mind. It’s kind of a weird technique, but what else would you expect from Bryson….

Relaxing in his hotel room, in the early part of tournament weeks, Bryson places a sensor around his head which monitors brain activity in terms of the peaks and troughs of its electrical current - or ‘waves’ as they’re more commonly known as.

And then he sticks on a movie. Something fast-paced with a lot of action, maybe a superhero film. But he’s not watching for pleasure.

The film is supposed to act as a trigger. If Bryson’s brain activity tips over a certain point, the film stops. Only when he relaxes his brain – using a combination of breathing techniques to control his heart rate and other mental skills – will the movie play once again.

So continually, throughout this process, Bryson is learning how to be calm, focused and stress-free; how to manage his own mental state.

Why does he do this? Tournament golf makes people nervous, even the best players in the world. Especially coming down the stretch in the bigger events.

And with studies in golf showing that the lower arousal levels correlate with better performance, it’s clear he’s trying to gain an edge over the competition on the PGA Tour and at the majors. The more comfortable, less ‘bothered’ he feels by what’s going on, the lower his arousal levels and the better he’s going to be able to perform in the heat of battle.

In 2018, about a year after he started practising his mental skills this way, he won four times. Coincidence?

And during the final round of the 2020 US Open it was striking to see Bryson slow himself down a number of times as he walked off greens. Go back and watch - you’ll see him do this numerous times as he tussles with Matt Wolff. He knew his arousal levels were getting too high, so he successfully managed his mental state to help him perform better and get the W.

Everyone has seen Bryson bulk up and hit it longer, see his speed and distance gains, which has helped him build his brand and increase his profitability to sponsors. And as more players copy him in the pursuit of distance, he’s seen as a pioneer.

No one can ‘see’ his mental skills improve.

Arguably, Bryson doesn’t mind that. This form of training going under the radar only gives him more of an advantage.

Now you know what Bryson is working on behind closed doors. His mind.

And you can too.

The Power Of Positive Thinking
Discover why positivity will give you the edge on the golf course.

Love Your Putting Stroke
A thought before your round